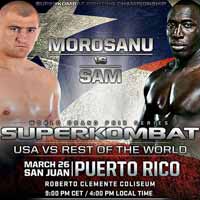 Review by AllTheBestFights.com: 2013-03-26, some good exchanges between Catalin Morosanu and Daniel Sam but it is not enough to get three stars: it gets two.

The former SuperKombat Hw champion Catalin Morosanu entered this fight with a professional kickboxing record of 42-8-0 (25 knockouts) and he is ranked as the No.11 heavyweight in the world. He suffered his last loss when he faced Tomas Hron in 2014, since then he has won five consecutive bouts beating Maurice Jackson in his last one.
His opponent, Daniel Sam, has an official record of 24-12-0 (9 knockouts) and he entered as the No.12 in the same weight class. He fought twice last year defeating Brian Douwes but then he lost to Xavier Vigney (=Sam vs Vigney). Morosanu vs Sam, SuperKombat heavyweight championship eliminator, is the main event of the SuperKombat World Grand Prix I 2016; they also faced each other a second time on June 6, 2019 (Catalin Morosanu vs Daniel Sam 2). Watch the video and rate this fight!