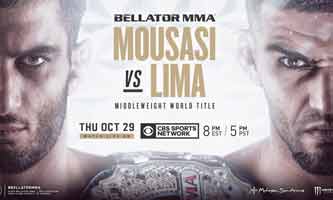 Review by AllTheBestFights.com: 2020-10-29, disappointing fight between Gegard Mousasi and Douglas Lima: it gets two stars.
The black belt in judo, former Strikeforce light-Hw and former Bellator Mw champion Gegard Mousasi entered this fight with a professional mma record of 46-7-2 (83% finishing rate) and he is ranked as the No.4 middleweight in the world (currently the #1 in this division is Israel Adesanya). He fought twice last year, losing to Rafael Lovato Jr (via majority decision, Gegard Mousasi vs Rafael Lovato Jr) and beating Lyoto Machida in their rematch (Gegard Mousasi vs Lyoto Machida 2).
His opponent, the black belt in Bjj and former Bellator Ww champ Douglas Lima, has an official record of 32-7-0 (81% finishing rate) and he entered as the No.5 welterweight. He was defeated by Rory MacDonald in 2018 (in their first fight, Douglas Lima vs Rory MacDonald) but then he has won over Andrey Koreshkov (Douglas Lima vs Andrey Koreshkov 3), Michael Page (Douglas Lima vs Michael Page) and he has took revenge on MacDonald in his last one (Rory MacDonald vs Douglas Lima 2). Lima vs Mousasi, main event of Bellator 250, is valid for the vacant Bellator middleweight title. Watch the video and rate this fight!