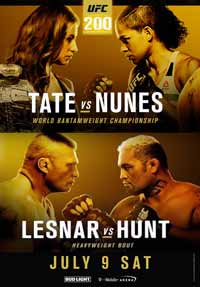 Review by AllTheBestFights.com: 2016-07-09, good finish between Gegard Mousasi and Thiago Santos: it gets three stars (UFC Performance of the Night).

The black belt in judo and former Strikeforce light-Hw champion Gegard Mousasi entered this fight with a professional record of 38-6-2 (82% finishing rate) and he is ranked as the No.6 middleweight in the world (currently the #1 in this division is Michael Bisping). He lost to Uriah Hall in 2015 (=Mousasi vs Hall) but he came back to win in 2016 winning over Thales Leites (=Mousasi vs Leites).
His opponent, Thiago ‘Marreta’ Santos, has a mma record of 13-3-0 (69% finishing rate) and he entered as the No.17 in the same weight class. He also suffered his last defeat against Uriah Hall (in 2014 Hall vs Santos), but since then he has collected four victories beating Nate Marquardt in his last one. Mousasi vs Santos is on the undercard of Miesha Tate vs Amanda Nunes – UFC 200. Watch the video and rate this fight!