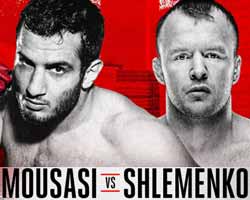 Review by AllTheBestFights.com: 2017-10-20, nice and tough fight between Gegard Mousasi and Alexander Shlemenko: it gets three stars.

The black belt in judo and former Strikeforce light-Hw champion Gegard Mousasi entered this fight with a professional mma record of 42-6-2 (86% finishing rate) and he is ranked as the No.4 middleweight in the world (currently the #1 in this division is the black belt in judo and former Strikeforce light-Hw champion). He lost to Uriah Hall in their first fight in 2015 (=Mousasi vs Hall I) but then he has won five bouts taking revenge on Hall in 2016 (=Mousasi vs Hall 2) and beating Chris Weidman in 2017 (=Weidman vs Mousasi).
His opponent, the former Bellator and M-1 Mw champion Alexander Shlemenko, has an official record of 56-9-0 (71% finishing rate) and he entered as the No.17 in the same weight class. He suffered two consecutive defeats in 2014, against Tito Ortiz (bout in which he moved up in weight class to the light-Hw division, Shlemenko vs Ortiz) and Brandon Halsey in their first fight (losing his Bellator title Shlemenko vs Halsey); after this bout he has collected six victories and one no-contest taking revenge on Halsey in his last bout (=Shlemenko vs Halsey). Mousasi vs Shlemenko is the main event of the Bellator 185. Watch the video and rate this fight!

(Free embeddable video hosted on Youtube and not uploaded by AllTheBestFights)
https://www.youtube.com/watch?v=WEmYTB1g-Ww