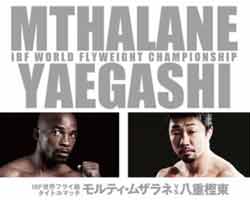 Review by AllTheBestFights.com: 2019-12-21, great performance by both boxers: Moruti Mthalane vs Akira Yaegashi is close to get four stars.

The current Ibf and former Ibo Flw champion Moruti Mthalane entered this fight with a pro record of 38-2-0 (25 knockouts) and he is ranked as the No.4 flyweight in the world (currently the #1 in this division is Kosei Tanaka). He suffered his last loss when he faced Nonito Donaire in 2008, since then he has won 15 consecutive fights beating Muhammad Waseem, Masahiro Sakamoto and Masayuki Kuroda.
His opponent, the former world champion in three different weight classes Akira Yaegashi, has an official boxing record of 28-6-0 (16 knockouts) and he entered as the No.14 super flyweight. He lost to Milan Melindo in 2017 (Akira Yaegashi vs Milan Melindo) but then he has won over Frans Damur Palue, Hirofumi Mukai and Sahaphap Bunop. Mthalane vs Yaegashi is valid for the IBF World flyweight title (Mthalane’s third defense); undercard of Ryota Murata vs Steven Butler. Watch the video and rate this fight!