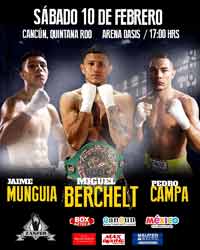 The undefeated Jaime Munguia entered this fight with a perfect boxing record of 26-0-0 (22 KOs=85%) and he is ranked as the No.34 super welterweight in the world. He fought seven times last year winning over Miguel Angel Lopez, Uriel Gonzalez and Paul Valenzuela Jr in his last three.
His opponent, Jose Carlos Paz, has an official record of 21-6-1 (12 knockouts) and he entered as the No.49 in the same weight class. He suffered two consecutive defeats in 2016, against Hector David Saldivia and Guido Nicolas Pitto, but then he has beat Gumersindo Lucas Carrasco and Jorge Paez Jr. Munguia vs Paz is on the undercard of Miguel Berchelt vs Maxwell Awuku. Watch the video and rate this fight!