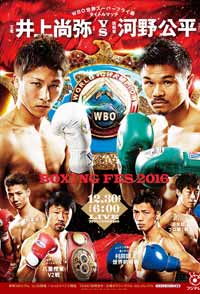 Review by AllTheBestFights.com: 2016-12-30, pretty good finish between Ryota Murata and Bruno Sandoval but it is not enough to get three stars: it gets two.

The undefeated 2012 Olympic middleweight gold medalist Ryota Murata entered this fight with a perfect boxing record of 11-0-0 (8 knockouts) and he is ranked as the No.14 middleweight in the world. He has already fought three times in 2016 winning over Gaston Alejandro Vega (=Murata vs Vega), Felipe Santos Pedroso (=Murata vs Pedroso) and George Tahdooahnippah (=Murata vs Tahdooahnippah).
His opponent, Bruno Sandoval, has an official record of 19-1-1 (15 KOs=79%) and he suffered his only loss when he faced Esau Herrera in 2013, since then he has collected four victories and one draw beating Roberto Valdez in his last bout. Murata vs Sandoval is on the undercard of Naoya Inoue vs Kohei Kono. Watch the video and rate this fight!