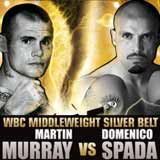 Review: 2014-10-25, disappointing and boring fight: Martin Murray vs Domenico Spada gets one star. Martin Murray entered this fight with a boxing record of 28-1-1 (12 knockouts) and he is ranked as the No.7 middleweight in the world (currently the #1 in this division is Gennady Golovkin), he suffered his only defeat last year when he faced Sergio Gabriel Martinez in Argentina (=Martinez vs Murray); after that bout he has won three fights beating Ishmael Tetteh and Max Bursak in 2014 (=Murray vs Bursak).
His opponent, Domenico Spada, has an official record of 39-5-0 (19 knockouts) and he entered as the No.80 in the same weight class, he has already fought twice in 2014 as well but he lost the first bout, against Marco Antonio Rubio (=Rubio vs Spada) and then he defeated Nikola Matic. Murray vs Spada is valid for the WBC Silver middleweight title. Watch the video and rate this fight!

Report broken video
« 2014 BOXING fight – Hekkie Budler vs Xiong Zhao Zhong – full fight Video WBA, IBO
2014 MMA fight – Fabio Maldonado vs Hans Stringer – full fight Video UFC 179 »
HELP US!!! Since the CORONAVIRUS pandemic started, AllTheBestFights.com has struggled to survive! If you have enjoyed this website for the past 10 years, today we ask you for a little help: