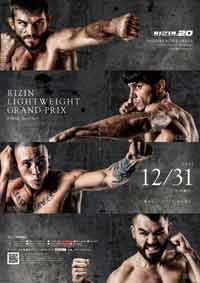 Review by AllTheBestFights.com: 2019-12-31, nice exchanges between Patricky Freire and Tofiq Musayev: it gets three stars.

The black belt in Bjj Patricky Freire entered this fight with a pro record of 23-8-0 (70% finishing rate) and he is ranked as the No.12 lightweight in the world. Patricky Pitbull lost to Michael Chandler in 2016 (Chandler vs Freire 2) but then he has won seven bouts defeating Luiz Gustavo Felix dos Santos in the semifinal of the Rizin lightweight Grand Prix mma tournament (Patricky Freire vs Luiz Gustavo Felix dos Santos).
His opponent, Tofiq Musayev, has an official mma record of 17-3-0 (94% finishing rate) and he entered as the No.43 in the same weight class. He suffered his last loss when he faced Aigun Akhmedov in 2014, since then he has won 13 consecutive bouts defeating Johnny Case in his last one. Freire vs Musayev is the final of Rizin lightweight Grand Prix mma tournament; undercard of Kai Asakura vs Manel Kape – RIZIN 20. Watch the video and rate this fight!