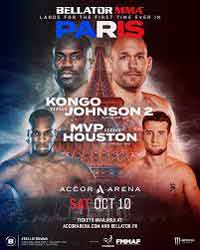 Review by AllTheBestFights.com: 2020-10-10, disappointing fight between Michael Page and Ross Houston: it gets two stars.
The freestyle kickboxer Michael ‘Venom’ Page entered this fight with a pro record of 17-1-0 (82% finishing rate) and he is ranked as the No.41 welterweight in the world. He suffered his first loss against Douglas Lima last year (Douglas Lima vs Michael Page), but then he has beat Richard Kiely (Michael Page vs Richard Kiely), Giovanni Melillo (Michael Page vs Giovanni Melillo) and Shinsho Anzai (Michael Page vs Shinsho Anzai).
His opponent, the undefeated Ross Houston, has a perfect mma record of 8-0-0 (38% submission victory rate – he has never won via ko/tko) but he is not ranked as he hasn’t fought since June 29, 2019 when he faced Nicolas Dalby; before this bout he had beat Stefano Paterno and Nathan Jones. Houston vs MVP is the main event of the Bellator 248 (also known as Bellator Paris). Watch the video and rate this fight!