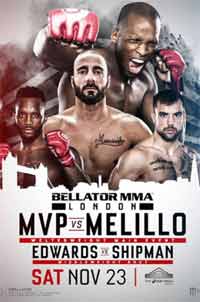 Review by AllTheBestFights.com: 2019-11-23, pretty good finish between Michael Page and Giovanni Melillo but it is not enough to get three stars: it gets two.

The freestyle kickboxer Michael ‘Venom’ Page entered this fight with a professional mma record of 15-1-0 (80% finishing rate) and he is ranked as the No.41 welterweight in the world. He has already fought three times in 2019 beating Paul Daley (Michael Page vs Paul Daley) and Richard Kiely (Michael Page vs Richard Kiely) but between these two bouts he lost his first fight, against Douglas Lima (Douglas Lima vs Michael Page).
His opponent, Giovanni Melillo, has an official record of 13-4-0 (77% finishing rate) and he entered as the No.302 in the same weight class. He suffered two consecutive defeats between 2018 and 2019, against Daniel Skibinski and Michelangelo Colangelo, but he came back to win in his last one, with Will Chope. MVP vs Melillo is the main event of Bellator London 2 (Bellator 235). Watch the video and rate this fight!

(Free embeddable video hosted on ok.ru/Youtube/Facebook and not uploaded by AllTheBestFights)