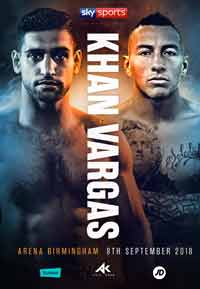 Review by AllTheBestFights.com: 2018-09-08, good exchanges between Sam Eggington and Hassan Mwakinyo: it gets three stars.

Sam Eggington entered this fight with a pro record of 23-4-0 (15 knockouts) and he is ranked as the No.8 super welterweight in the world (currently the #1 in this division is Jarrett Hurd). He lost to Mohamed Mimoune last year (Sam Eggington vs Mohamed Mimoune) but he came back to win with Achilles Szabo and Peter Kramer in 2018.
His opponent, Hassan Mwakinyo, has an official boxing record of 11-2-0 (7 knockouts) and he entered as the No.174 in the same weight class. He also lost in 2017, against Lendrush Akopian, but then he has won over Ambokile Chusa. Eggington vs Mwakinyo is on the undercard of Amir Khan vs Samuel Vargas. Watch the video and rate this fight!

(Free embeddable video hosted on Youtube and not uploaded by AllTheBestFights)
https://www.youtube.com/watch?v=jWQiF3Dppzc