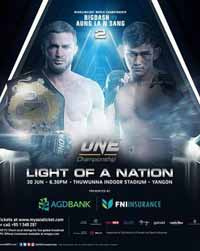 Review by AllTheBestFights.com: 2017-06-30, fight not particularly good between Vitaly Bigdash and Aung La N Sang 2: it gets two stars.

The undefeated ONE Mw champion Vitaly Bigdash entered this fight with a perfect mma record of 9-0-0 (89% finishing rate) and he is ranked as the No.34 middleweight in the world while his opponent, Aung La N Sang, has an official record of 19-10-0 (95% finishing rate) and he entered as the No.71 in the same weight class. In their first fight Bigdash defeated N Sang via unanimous decision (January 14, 2017). Vitaly Bigdash vs Aung La N Sang 2, main event of ONE FC 56, is valid for the ONE middleweight title; they also faced each other a third time in February 2022 (Aung La N Sang vs Vitaly Bigdash 3). Watch the video and rate this fight!

Event: One Championship 56: Light of a Nation