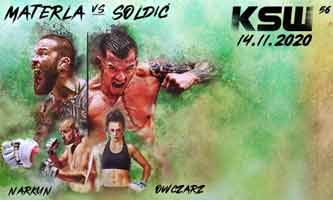 Review by AllTheBestFights.com: 2020-11-14, pretty good finish between Tomasz Narkun and Ivan Erslan but it is not enough to get three stars: it gets two.
The black belt in Brazilian jiu-jitsu, former M-1 Global and current Ksw light-Hw champion Tomasz Narkun entered this fight with a pro mma record of 17-3-0 (94% finishing rate) and he is ranked as the No.20 light heavyweight in the world. He fought twice last year losing to Philip De Fries (Philip De Fries vs Tomasz Narkun) and beating Przemyslaw Mysiala (Tomasz Narkun vs Przemyslaw Mysiala).
His opponent, the undefeated Ivan Erslan, has a perfect record of 9-0-0 (67% finishing rate) and he entered as the No.95 in the same weight class. In his last three fights he has won over Roger Carroll, Darwin Rodriguez and Jusuf Hajrovic. Erslan vs Narkun is valid for the KSW light heavyweight title; undercard of Michal Materla vs Roberto Soldic – KSW 56. Watch the video and rate this fight!