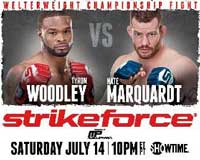 Review: 2012-07-14, great performance by both fighters and outstanding knockout: Nate Marquardt vs Tyron Woodley is very close to get four stars. The undefeated Tyron Woodley ranked as the No.17 welterweight in the world, entered the fight with a record of 10-0-0 while Nate Marquardt had a record of 31-10-2 (Marquardt is not ranked as he hasn’t fought since March 19, 2011 when he defeated Dan Miller). Marquardt vs Woodley is valid for the Strikeforce Welterweight Championship title; undercard of Luke Rockhold vs Tim Kennedy. Watch the video!