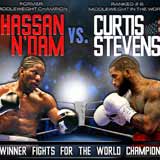 Review: 2014-10-01, some good exchanges in the second part of the fight but it is not enough to get three stars: Curtis Stevens vs Hassan N’Dam N’Jikam gets two. Curtis Stevens entered this fight with a pro boxing record of 27-4-0 (20 knockouts) and he is ranked as the No.19 middleweight in the world, he suffered his last loss at the end of 2013 when he faced the undefeated Gennady Golovkin (bout valid for the Wba and Ibo middleweight titles =Golovkin vs Stevens); he came back to win in 2014 beating Patrick Majewski (=Stevens vs Majewski) and Tureano Johnson (=Stevens vs Johnson).
His opponent, Hassan N’Dam N’Jikam, has a record of 30-1-0 (18 knockouts) and he entered as the No.25 in the same weight class, he won the interim Wbo Mw belt in 2012 against Max Bursak (=N’Dam vs Bursak) but then he lost it to the undefeated Peter Quillin (=N’Dam vs Quillin); after that bout he won three consecutive fights, the last one against Fulgencio Zuniga. Stevens vs N’Jikam, IBF middleweight title eliminator. Watch the video and rate this fight!