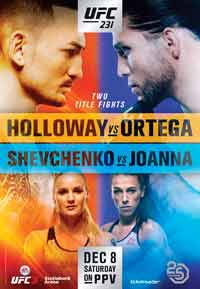 Review by AllTheBestFights.com: 2018-12-08, good finish between Gunnar Nelson and Alex Oliveira: it gets three stars.

The black belt in karate and Brazilian jiu-jitsu Gunnar Nelson entered this fight with a mma record of 16-3-1 (94% finishing rate) but he is not ranked as he hasn’t fought since July 16, 2017 when he was defeated by Santiago Ponzinibbio (Gunnar Nelson vs Santiago Ponzinibbio); before this bout he had beat Alan Jouban (Nelson vs Jouban).
His opponent, Alex Oliveira, has an official record of 19-5-1 (84% finishing rate) and he entered as the No.16 welterweight in the world. He lost to Yancy Medeiros last year (Alex Oliveira vs Yancy Medeiros) but then ‘Cowboy’ Oliveira has won over Carlos Condit (Carlos Condit vs Alex Oliveira) and Carlo Pedersoli Jr (Alex Oliveira vs Carlo Pedersoli Jr). Nelson vs Oliveira is on the undercard of Max Holloway vs Brian Ortega – UFC 231. Watch the video and rate this fight!