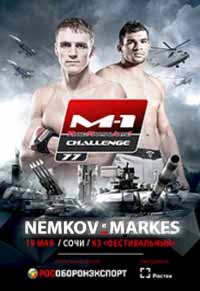 Review by AllTheBestFights.com: 2017-05-19, fight not so exciting between Viktor Nemkov and Ronny Markes: it gets two stars.

The 2011 World Combat Sambo and former M-1 light-Hw champion Viktor Nemkov entered this fight with a professional mma record of 24-6-0 (58% finishing rate) and he is ranked as the No.18 light heavyweight in the world. He fought twice last year losing to Rashid Yusupov (via split decision) and beating Attila Vegh (=Nemkov vs Vegh).
His opponent, the black belt in Brazilian jiu-jitsu Ronny Markes, has an official record of 16-4-0 (62% finishing rate) and he entered as the No.93 heavyweight. He was defeated by Cassio Barbosa de Oliveira in 2016 but he came back to win in 2017 against Tony Lopez. Viktor Nemkov vs Ronny Markes is the main event of M-1 Challenge 77. Watch the video and rate this fight!