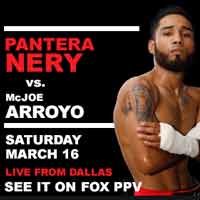 Review by AllTheBestFights.com: 2019-03-16, fight not so exciting between Luis Nery and McJoe Arroyo: it gets two stars.

The undefeated former Wbc Bw champion Luis Nery entered this fight with a perfect boxing record of 28-0-0 (22 KOs=79%) and he is ranked as the No.1 bantamweight in the world. In his last three bouts ‘Pantera’ Nery has won over Shinsuke Yamanaka (Luis Nery vs Shinsuke Yamanaka II), Jason Canoy (Luis Nery vs Jason Canoy) and Renson Robles (Luis Nery vs Renson Robles).
His opponent, the former Olympian and former Ibf super-Flw champ McJoe Arroyo, has an official record of 18-2-0 (8 knockouts) and he entered as the No.48 in the same weight class. He lost two consecutive bouts between 2016 and 2017, against Jerwin Ancajas (McJoe Arroyo vs Jerwin Ancajas) and Rau’shee Warren, but he came back to win in 2018 against Sander Diaz. Nery vs Arroyo is on the undercard of Errol Spence Jr vs Mikey Garcia. Watch the video and rate this fight!