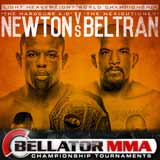 Review: 2014-09-12, Emanuel Newton vs Joey Beltran gets three stars only thanks to a spectacular finish. Emanuel Newton entered this fight with a professional mma record of 23-7-1 (48% finishing rate) and he is ranked as the No.11 light heavyweight in the world (currently the #1 in this division is Jon Jones), he suffered his last defeat in 2012 when he faced Attila Vegh in their first bout (via split decision, Vegh vs Newton) since then he has won five consecutive bouts and in his last one he took revenge on Vegh (Vegh vs Newton 2).
His opponent, Joey Beltran, has an official record of 15-10-0 (87% finishing rate) and he entered as the No.30 in the same weight class, he lost twice in 2013, against Fabio Maldonado (=Maldonado vs Beltran) and Quinton ‘Rampage’ Jackson (=Rampage vs Beltran), but he came back to win in 2014 defeating Vladimir Matyushenko (=Matyushenko vs Beltran). Newton vs Beltran, main event of Bellator 124, is valid for the Bellator light heavyweight title (held by Newton). Watch the video and rate this fight!