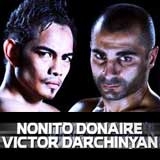 Review: 2013-11-09, good finish but the rest of the fight was not so exciting: the second fight between Nonito Donaire and Vic Darchinyan gets two stars. Nonito Donaire (31-2-0, 20 KOs) entered as the No.2 super bantamweight in the world while Vic Darchinyan (39-5-1, 28 KOs) entered as the No.11 (currently the #1 in this weight division is Guillermo Rigondeaux). In their first fight Donaire defeated Darchinyan by tko (and was named Knockout of the Year 2007 by Ring Magazine); this second fight is on the undercard of Mikey Garcia vs Roman Martinez. Watch the video!

(Free embeddable highlights video hosted on Youtube and it was not uploaded by AllTheBestFights, to report it please visit this link where the video is hosted)