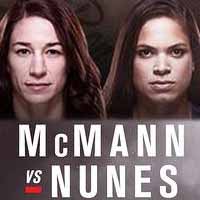 Review by AllTheBestFights.com: 2015-08-08, good fight between Sara McMann and Amanda Nunes: it gets three stars (UFC Performance of the Night).

Sara McMann entered this fight with a pro mma record of 8-2-0 (50% finishing rate) and she is ranked as the No.6 women’s bantamweight in the world (currently the #1 in this division is Ronda Rousey) but she comes off the loss against Miesha Tate (=Tate vs McMann).
Her opponent, the black belt in Bjj Amanda Nunes, has an official record of 10-4-0 (100% finishing rate) and she entered as the No.15 in the same weight class. She was defeated by Cat Zingano last year (=Zingano vs Nunes) but she came back to win in 2015 beating Shayna Baszler (=Nunes vs Baszler). McMann vs Nunes is on the undercard of Glover Teixeira vs Ovince Saint Preux – UFC Fight Night 73. Watch the video and rate this fight!