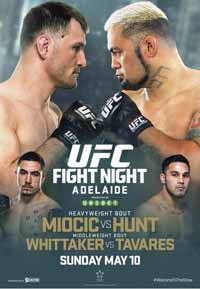 Review by AllTheBestFights.com: 2015-05-10, fight not particularly good between Anthony Perosh and Sean O’Connell: it gets two stars.

The black belt in Brazilian jiu-jitsu and karate Anthony Perosh entered this fight with a mma record of 15-8-0 (100% finishing rate) and he is ranked as the No.32 light heavyweight in the world. He suffered his last loss in 2013 when he faced Ryan Bader (=Bader vs Perosh), since then he has fought and won just once, against Guto Inocente.
His opponent, Sean O’Connell, has an official record of 16-6-0 (69% finishing rate) and he entered as the No.40 in the same weight class. He lost two consecutive bouts in 2014, against Ryan Jimmo (=Jimmo vs O’Connell) and Gian Villante, but then he came back to win in 2015 beating Matt Van Buren. Perosh vs O’Connell is on the undercard of Mark Hunt vs Stipe Miocic – UFC Fight Night 65. Watch the video and rate this fight!