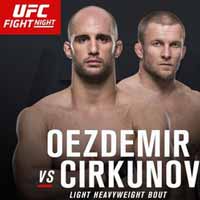 Review by AllTheBestFights.com: 2017-05-28, some good shots between Misha Cirkunov and Volkan Oezdemir but it is not enough to get three stars: it gets two.

The black belt in Bjj Misha Cirkunov entered this fight with a pro mma record of 13-2-0 (85% finishing rate) and he is ranked as the No.12 light heavyweight in the world. He suffered his last loss when he faced Aaron Johnson in 2012, since then he has won eight consecutive bouts beating Alex Nicholson, Ion Cutelaba and Nikita Krylov in 2016.
His opponent, Volkan Oezdemir, has a record of 13-1-0 (77% finishing rate) and he entered as the No.17 in the same weight class. He lost to Kelly Anundson in 2014 but then he has won three fights defeating Ovince Saint Preux in his last one (=St Preux vs Oezdemir). Misha Cirkunov vs Volkan Oezdemir is on the undercard of Alexander Gustafsson vs Glover Teixeira – UFC Fight Night 109. Watch the video and rate this fight!