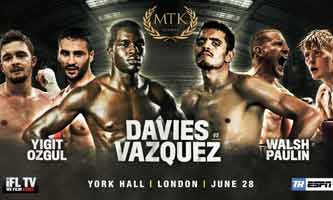 Review by AllTheBestFights.com: 2019-06-28, pretty boring fight between Ohara Davies and Miguel Vazquez: it gets two stars.

Ohara Davies entered this fight with a professional boxing record of 18-2-0 (14 KOs=78%) and he is ranked as the No.29 super lightweight in the world. He fought three times last year beating Ahmed Ibrahim and Paul Kamanga but then he lost to Jack Catterall (Jack Catterall vs Ohara Davies).
His opponent, the former Ibf Lw champ Miguel Vazquez, has an official record of 41-7-0 (15 knockouts) and he entered as the No.47 welterweight. He was defeated by Thulani Mbenge in 2018 (Thulani Mbenge vs Miguel Vazquez) but he came back to win in 2019 against Ghislain Maduma. Davies vs Vazquez is the main event of the evening. Watch the video and rate this fight!