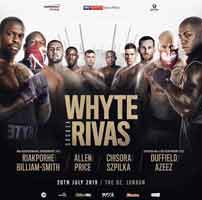 Review by AllTheBestFights.com: 2019-07-20, one sided fight between Lawrence Okolie and Mariano Angel Gudino: it gets two stars.

The undefeated former Olympian Lawrence Okolie entered this fight with a perfect record of 12-0-0 (9 KOs=75%) and he is ranked as the No.8 cruiserweight in the world (currently the #1 in this division is Oleksandr Usyk). In his last three fights he has won over Matty Askin (Matty Askin vs Lawrence Okolie), Tama Lodi (Lawrence Okolie vs Tamas Lodi) and Wadi Camacho (Lawrence Okolie vs Wadi Camacho).
His opponent, Mariano Angel Gudino, has a boxing record of 13-2-0 (8 knockouts) and he entered as the No.106 in the same weight class but he lost two out of his last three fights, against Joel Tambwe Djeko and Dario German Balmaceda but then he has beat Marcelo Adrian Fernandez. Okolie vs Gudino is valid for the WBA Continental cruiserweight title; undercard of Dillian Whyte vs Oscar Rivas. Watch the video and rate this fight!