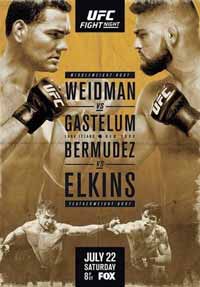 Review by AllTheBestFights.com: 2017-07-22, Alex Oliveira vs Ryan LaFlare gets three stars only thanks to a good finish (UFC Performance of the Night).

Alex Oliveira entered this fight with a record of 16-4-1 (81% finishing rate) and he is ranked as the No.13 welterweight in the world. ‘Cowboy’ lost to Donald Cerrone at the beginning of 2016 (=Cerrone vs Oliveira), but then he has collected three victories and one no-contest beating Tim Means in his last one (=Means vs Oliveira 2).
His opponent, Ryan LaFlare, has a mma record of 13-1-0 (54% finishing rate) and he entered as the No.23 in the same weight class. He lost to Demian Maia in 2015 (=Maia vs LaFlare) but then he has beat Mike Pierce and Roan Carneiro. Alex Oliveira vs Ryan LaFlare is on the undercard of Chris Weidman vs Kelvin Gastelum – UFC on Fox 25. Watch the video and rate this fight!