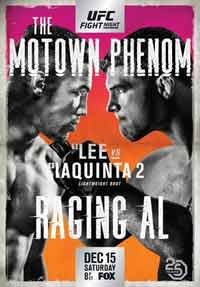 Review by AllTheBestFights.com: 2018-12-15, fight not so exciting between Charles Oliveira and Jim Miller 2: it gets two stars (UFC Performance of the Night).

The black belt in Brazilian jiu-jitsu Charles Oliveira entered this fight with a professional record of 24-8-0 (92% finishing rate) and he is ranked as the No.13 lightweight in the world. He was defeated by Paul Felder in 2017 (Charles Oliveira vs Paul Felder) but then he has beat Clay Guida and Christos Giagos.
His opponent, Jim Miller (black belt in Bjj as well), has a mma record of 29-12-0 (66% finishing rate) and he entered as the No.40 in the same weight class but he lost four out of his last five bouts, the last one with Dan Hooker (Jim Miller vs Dan Hooker); after this fight he has beat Alex White. In their first bout Oliveira was defeated by Miller via submission (December 11, 2010); this second fight is on the undercard of Kevin Lee vs Al Iaquinta 2 – UFC on Fox 31. Watch the video and rate this fight!