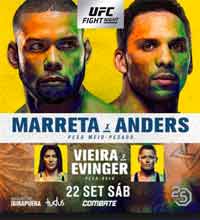 Alex Oliveira entered this fight with a pro record of 18-5-1 (83% finishing rate) and he is ranked as the No.14 welterweight in the world. He lost to Yancy Medeiros last year (Alex Oliveira vs Yancy Medeiros) but he came back to win with Carlos Condit in 2018 (Carlos Condit vs Alex Oliveira).
His opponent, Carlo Pedersoli Jr (Bud Spencer’s grandson), has an official mma record of 11-1-0 (64% finishing rate) and he entered as the No.161 in the same weight class. He suffered his only loss when he faced Yuki Okano in 2015, since then he has won eight consecutive bouts beating Nicolas Dalby and Bradley Scott in 2018. Oliveira vs Pedersoli is on the undercard of Thiago Santos vs Eryk Anders – UFC Fight Night 137. Watch the video and rate this fight!

(Free embeddable video hosted on Youtube and not uploaded by AllTheBestFights)
https://www.youtube.com/watch?v=QMvX7OWIKoo