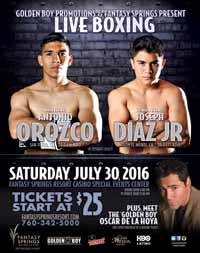 Review by AllTheBestFights.com: 2016-07-30, good performance by both boxers: Antonio Orozco vs Abner Lopez gets three stars.

The undefeated Antonio Orozco entered this fight with a perfect record of 24-0-0 (16 knockouts) and he is ranked as the No.10 welterweight in the world (currently the #1 in this division is Manny Pacquiao). He has already fought once in 2016 beating Miguel Acosta (=Orozco vs Acosta).
His opponent, Abner Lopez, has a boxing record of 23-5-0 (19 KOs=83%) and he entered as the No.70 in the same weight class but he comes off the loss against Daniel Echeverria (=Lopez vs Echeverria). Orozco vs Lopez is the main event of the evening. Watch the video and rate this fight!