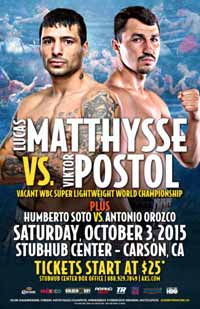 Review by AllTheBestFights.com: 2015-10-03, pretty good fight between Antonio Orozco and Humberto Soto: it gets three stars.

The undefeated Antonio Orozco entered this fight with a perfect boxing record of 22-0-0 (15 knockouts) and he is ranked as the No.39 welterweight in the world; he has fought once in 2015 beating Emmanuel Taylor (=Taylor vs Orozco).
His opponent, the former world champion in three different weight classes Humberto Soto, has a record of 65-8-2 (35 knockouts) but he is not ranked as he hasn’t fought since September 13, 2014 when ‘La Zorrita’ defeated John Molina Jr (=Soto vs Molina). Orozco vs Soto is on the undercard of Lucas Matthysse vs Viktor Postol. Watch the video and rate this fight!