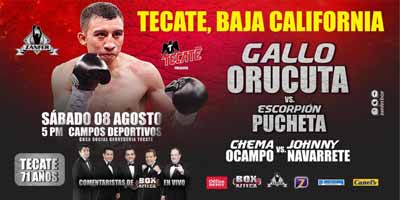 Review by AllTheBestFights.com: 2015-08-08, great fight between Felipe Orucuta and Roberto Pucheta Amador: it gets three stars.

Felipe Orucuta entered this fight with a boxing record of 30-3-0 (25 KOs=83%) and he is ranked as the No.10 super flyweight in the world while his opponent, Roberto Pucheta Amador, has an official record of 9-5-1 (5 knockouts) and he entered as the No.56 in the same weight class. ‘Gallito’ Orucuta lost to Omar Narvaez last year in their rematch (=Narvaez vs Orucuta 2) but he came back to win in 2015 beating Ricardo Roman. Orucuta vs Amador is the main event of the evening. Watch the video and rate this fight!