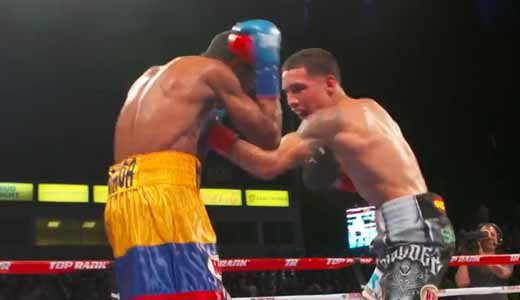 Review by AllTheBestFights.com: 2017-04-22, close and tough fight with an exciting finish: Oscar Valdez vs Miguel Marriaga is one of the best boxing fights of 2017 and it gets four stars!

The undefeated Wbo Fw champion Oscar Valdez entered this fight with a perfect boxing record of 21-0-0 (19 KOs=90%) and he is ranked as the No.7 featherweight in the world (currently the #1 in this division is Leo Santa Cruz). He fought three times last year winning over Evgeny Gradovich (=Valdez vs Gradovich), Matias Carlos Adrian Rueda (=Valdez vs Rueda) and Hiroshige Osawa (=Valdez vs Osawa).
His opponent, Miguel Marriaga, has an official record of 25-1-0 (21 KOs=84%) and he entered as the No.26 in the same weight class. He suffered his only loss when he faced Nicholas Walters in 2015 (=Walters vs Marriaga), after this fight he has won five bouts beating Adones Aguelo, Guy Robb and Eduardo Montoya in 2016. Oscar Valdez vs Miguel Marriaga is valid for the WBO World featherweight title (Valdez’s second defense). Watch the video and rate this fight!