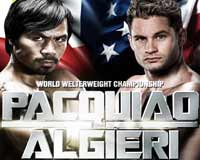 Review: 2014-11-23, one sided fight between Manny Pacquiao and Chris Algieri: we can’t give more than two stars. Manny Pacquiao entered this fight with a professional boxing record of 56-5-2 (38 knockouts) and he is ranked as the No.2 welterweight in the world (currently the #1 in this division is Floyd Mayweather Jr), he has won world titles in seven different weight classes but he suffered two consecutive defeats in 2012, against Timothy Bradley (controversial split decision Bradley vs Pacquiao I) and Juan Manuel Marquez in their fourth bout (=Pacquiao vs Marquez 4); after this fight he defeated Brandon Rios (=Pacquiao vs Rios) and then he took revenge on Bradley in their rematch (=Pacquiao vs Bradley 2).
His opponent, the undefeated Chris Algieri, has a perfect record of 20-0-0 (8 knockouts – he was the Wka and Iska world champion and he has the same record in kickboxing) and he entered as the No.7 light welterweight; he has fought twice in 2014 beating Emmanuel Taylor (=Taylor vs Algieri) and Ruslan Provodnikov in a bout valid for the Wbo light-Ww title (=Provodnikov vs Algieri). ‘Pac Man’ Pacquiao vs Algieri is valid for the WBO World welterweight title (Pacquiao’s first defense). Watch the video and rate this fight!

Video: (Free embeddable highlights video hosted on Youtube and not uploaded by AllTheBestFights, to report it please visit this link where the video is hosted)