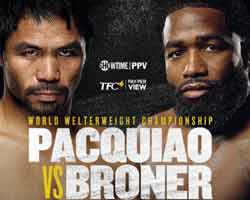 Review by AllTheBestFights.com: 2019-01-19, good fight between Manny Pacquiao and Adrien Broner: it gets three stars.

The 40-year-old world champion in eight different weight division Manny Pacquiao (eleven years older than Broner) entered this fight with a professional boxing record of 60-7-2 (39 knockouts) and he is ranked as the No.4 welterweight in the world (currently the #1 in this division is Terence Crawford). ‘Pac Man’ was defeated by Jeff Horn in 2017 (Manny Pacquiao vs Jeff Horn) but he came back to win against Lucas Matthysse (Manny Pacquiao vs Lucas Matthysse).
His opponent, the former world champ in four different weight classes Adrien Broner, has an official record of 33-3-1 (24 knockouts) and he entered as the No.12 in the same weight class but he comes off the draw with Jessie Vargas (Adrien Broner vs Jessie Vargas) while Pacquiao had beat Vargas in 2016 via unanimous decision (Manny Pacquiao vs Jessie Vargas). Before drawing with Vargas in 2018, ‘AB’ Broner had fought twice in 2017 beating Adrian Granados (Adrien Broner vs Adrian Granados) and losing to Mikey Garcia (Mikey Garcia vs Adrien Broner). Pacquiao vs Broner is valid for the WBA World welterweight title (Pacquiao’s first defense). Watch the video and rate this fight!