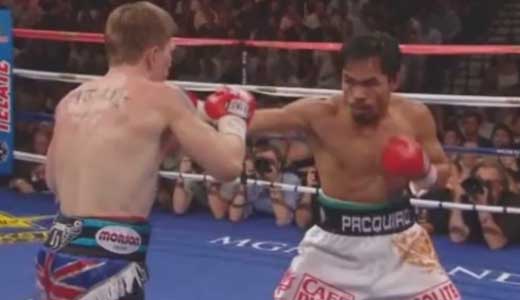 Review: 2009-05-02, the fight between Manny Pacquiao (48-3-2) and Ricky Hatton (45-1-0) lasted only 2 rounds, but it were six minutes very exciting. Hatton, after losing against Floyd Mayweather Jr (in 2007), trying to win the welterweight title, had returned in his light welterweight division winning the IBO‘s belt versus Juan Lazcano (in 2008). So Ricky “The Hitman” Hatton defended his title against Manny Pacquiao who tried to win a world title in the light welterweight category, even though he had just fought and won against Oscar De La Hoya at the welterweight limit. Pacquiao knocked down Hatton two times in the first round and knocked him out at the end of the second round, surely one of the best KO of 2009. (After this fight Hatton retired). Watch the video!