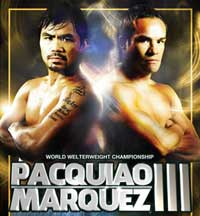 Review: 2011-11-12, the third fight between Manny Pacquiao and Juan Manuel Marquez was not a war as their second fight and it had not “unexpected moments” as in their first bout but it was just a good one and it was not as spectacular as we expected (or like other boxing fights of 2011 such as Wolak vs Rodriguez, Salido vs Juanma Lopez or Guerrero vs Katsidis), therefore we can’t give it more than three stars. Manny Pacquiao (53-3-2) entered as the No.1 welterweight in the world while Juan Manuel Marquez (53-5-1) entered as the No.1 lightweight. Pacquiao vs Marquez 3 was valid for the WBO welterweight title. Watch the video!