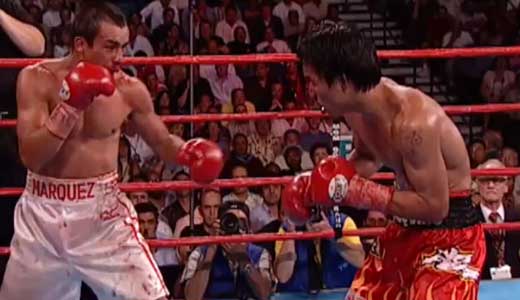 Review: 2004-05-08, Manny Pacquiao came from the first fight against Barrera (one of the Fights of the Year 2003) and tried to win his first title in the featherweight division since Juan Manuel Marquez was the reigning champion of the WBA and IBF featherweight titles. In the first round Manny Pacquiao surprised Marquez knocking down him three times, all thought the match was over but instead the fight ended after twelve rounds with a controversial draw (Harold Lederman scored the fight 115-110 for the Filipino). Manny Pacquiao entered the fight with a record of 38-2-1 while Juan Manuel Marquez had a record of 42-2-0. Watch the video!

Alternative Full fight video (This is a free embeddable video hosted on Msn.FoxSports.com)