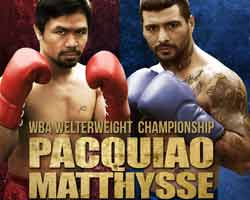 Review by AllTheBestFights.com: 2018-07-15, good fight between Manny Pacquiao and Lucas Matthysse: it gets three stars.

The former world champion in eight different weight division Manny Pacquiao entered this fight with a professional boxing record of 59-7-2 (38 knockouts) but he is not ranked as he hasn’t fought since July 2, 2017 when he was defeated by Jeff Horn (Manny Pacquiao vs Jeff Horn). Before this bout ‘Pac Man’ had beat Timothy Bradley Jr (Pacquiao vs Bradley 3) and Jessie Vargas in 2016 (Pacquiao vs Vargas).
His opponent, the world champion in two different weight classes Lucas Martin Matthysse, has an official record of 39-4-0 (36 KOs=92%) and he entered as the No.13 welterweight in the world. He lost to Viktor Postol in 2015 (Matthysse vs Postol) but then he has beat Emmanuel Taylor (Matthysse vs Taylor) and Tewa Kiram (Lucas Martin Matthysse vs Tewa Kiram). Pacquiao vs Matthysse is valid for the WBA World welterweight title (Matthysse’s first defense). Watch the video and rate this fight!

(Free embeddable video hosted on Dailymotion and not uploaded by AllTheBestFights)
https://www.dailymotion.com/video/x6orsgy