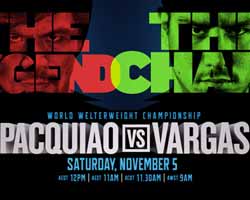 Review by AllTheBestFights.com: 2016-11-05, great fight between Manny Pacquiao and Jessie Vargas: it gets three stars.

The former world champion in eight different weight division Manny Pacquiao entered this fight with a professional record of 58-6-2 (38 knockouts) and he is ranked as the No.1 welterweight in the world. He lost to Floyd Mayweather Jr last year (=Mayweather vs Pacquiao) but he came back to win in 2016 against Timothy Bradley Jr in their third bout (=Pacquiao vs Bradley 3).
His opponent, the former Wba light-Ww and current Wbo Ww champion Jessie Vargas, has an official record of 27-1-0 (10 knockouts) and he entered as the No.8 in the same weight class. He suffered his only defeat when he faced Timothy Bradley in 2015 (=Bradley vs Vargas), after this fight he has fought once beating Sadam Ali in 2016 (=Vargas vs Ali). Pacquiao vs Vargas is valid for the WBO World welterweight title (Vargas’ first defense). Watch the video and rate this fight!