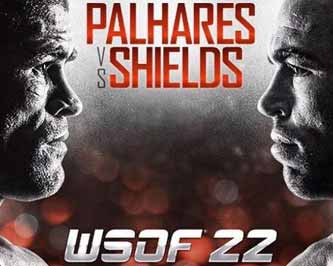 Review by AllTheBestFights.com: 2015-08-01, great work on the ground and good finish: Rousimar Palhares vs Jake Shields gets three stars.

The black belt in Brazilian jiu-jitsu Rousimar Palhares entered this fight with a professional mma record of 17-6-0 (82% submission victory rate – he has never won via ko/tko) and he is ranked as the No.7 welterweight in the world (currently the #1 in this division is Robbie Lawler). He suffered his last defeat in 2012 when he faced Hector Lombard (=Lombard vs Palhares) but since then he has collected three victories winning the Wsof Ww belt last year, against Steve Carl (Carl vs Palhares) and defending it once with Jon Fitch (=Palhares vs Fitch).
His opponent, the former Strikeforce Mw champion and black belt in Bjj Jake Shields, has an official record of 31-7-1 (48% finishing rate) and he entered as the No.10 in the same weight class. He also lost to Hector Lombard (in 2014 Shields vs Lombard) but then he came back to win beating Ryan Ford (=Shields vs Ford) and Brian Foster (=Shields vs Foster). ‘Toquinho’ Palhares vs Shields, main event of World Series of Fighting 22, is valid for the WSOF welterweight title (Palhares’ second defense). Watch the video and rate this fight!