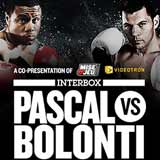 Review: 2014-12-06, disappointing and shameful finish between Jean Pascal and Roberto Bolonti: it gets one star! The former Wbc light-Hw champion Jean Pascal entered this fight with a professional boxing record of 29-2-1 (17 knockouts) and he is ranked as the No.3 light heavyweight in the world (currently the #1 in this division is Adonis Stevenson); he suffered his last defeat in 2011 when he faced Bernard Hopkins in their rematch (=Hopkins vs Pascal II), after this bout he has won three consecutive fights, the last one against Lucian Bute (=Pascal vs Bute).
His opponent, Roberto Feliciano Bolonti, has an official record of 35-3-0 (24 knockouts) and he entered as the No.31 in the same weight class, he has fought twice in 2014 beating Jose Alberto Clavero but then he lost to Juergen Braehmer (=Braehmer vs Bolonti). Pascal vs Bolonti is the main event of the evening. Watch the video and rate this fight!