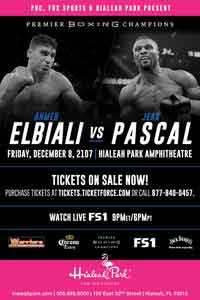 Review by AllTheBestFights.com: 2017-12-08, pretty good fight between Ahmed Elbiali and Jean Pascal: it gets three stars.

The former Wbc and Ibo light-Hw champion Jean Pascal entered this fight with a professional boxing record of 31-5-1 (18 knockouts) and he is ranked as the No.8 light heavyweight in the world (currently the #1 in this division is Adonis Stevenson) but he lost three out of his last five bouts, the last one with Eleider Alvarez (=Alvarez vs Pascal); before this fight he had beat Ricardo Marcelo Ramallo.
His opponent, the undefeated Ahmed Elbiali, has a perfect record of 16-0-0 (13 KOs=81%) and he entered as the No.40 in the same weight class. He has already fought twice in 2017 winning over Jackson Junior and Christopher Brooker. Elbiali vs Pascal is the main event of the evening. Watch the video and rate this fight!