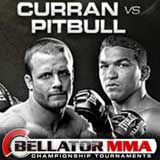 Review: 2013-01-17, pretty boring standing fight with just some good shots: Pat Curran vs Patricio Freire gets two stars. Pat Curran ranked as the No.2 featherweight in the world, entered the fight with a record of 17-4-0 while Patricio ‘Pitbull’ Freire had a record of 17-1-0 (Freire is not ranked as he hasn’t fought since May 21, 2011 when he defeated Daniel Straus). Pat Curran vs Pitbull Freire is valid for the Bellator featherweight title; undercard of Michael Chandler vs Rick Hawn – Bellator 85. Watch the video!