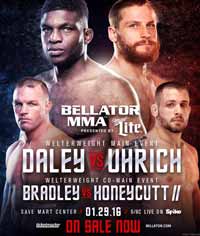 Review by AllTheBestFights.com: 2016-01-29, Patricky ‘Pitbull’ Freire vs Ryan Couture gets three stars thanks to a good finish of the fight.

The black belt in Brazilian jiu-jitsu Patricky Freire entered this fight with a professional record of 14-7-0 (71% finishing rate) and he is ranked as the No.47 lightweight in the world. He fought twice last year beating Saad Awad (=Freire vs Awad) but then he lost to Derek Anderson (via split decision, Freire vs Anderson 2).
His opponent, Ryan Couture, has a mma record of 10-3-0 (70% finishing rate) and he entered as the No.98 in the same weight class. He suffered two consecutive losses in 2013, but then he has won four bouts defeating Dakota Cochrane in his last one (=Couture vs Cochrane). ‘Pitbull’ Freire vs Couture is on the undercard of Paul Daley vs Andy Uhrich – Bellator 148. Watch the video and rate this fight!