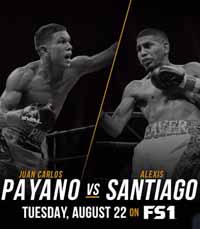 Review by AllTheBestFights.com: 2017-08-22, some good exchanges in the second part of the fight but it is not enough to get three stars: Juan Carlos Payano vs Alexis Santiago gets two.

The former Wba Bw champion Juan Carlos Payano entered this fight with a pro boxing record of 18-1-0 (9 knockouts) and he is ranked as the No.8 bantamweight in the world (currently the #1 in this division is Luis Nery). He suffered his only loss in the rematch with Rau’shee Warren (via majority decision, Payano vs Warren 2), after this bout he came back to win against Isao Gonzalo Carranza.
His opponent, Alexis Santiago, has a record of 21-4-1 (8 knockouts) and he entered as the No.48 super bantamweight. He fought twice last year beating Erik Ruiz and losing to Jose Cayetano. Juan Carlos Payano vs Alexis Santiago is the main event of the evening. Watch the video and rate this fight!