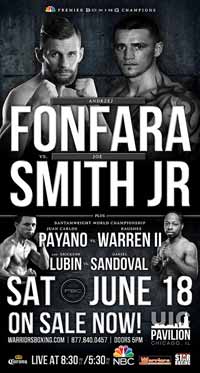 Review by AllTheBestFights.com: 2016-06-18, close bout with a good second part of the fight: Rau’shee Warren vs Juan Carlos Payano 2 gets three stars.

The undefeated Wba and Ibo champion Juan Carlos Payano entered this fight with a perfect record of 17-0-0 (8 knockouts) and he is ranked as the No.35 bantamweight in the world. He fought just once last year beating Rau’shee Warren (via split decision, Payano vs Warren I).
His opponent, the 2007 world amateur flyweight champion Rau’shee Warren, has an official boxing record of 13-1-0 (4 knockouts) and he entered as the No.40 in the same weight class. He fought twice in 2015 winning over Javier Gallo and losing to Payano in their first fight. Payano vs Warren 2 is valid for the WBA and IBO World bantamweight titles; undercard of Andrzej Fonfara vs Joe Smith Jr. Watch the video and rate this fight!

Their previous fight: Juan Carlos Payano vs Rau’shee Warren I