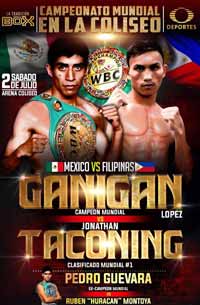 Review by AllTheBestFights.com: 2016-07-02, some good exchanges between Pedro Guevara and Ruben Montoya but it is not enough to get three stars: it gets two.

The former Wbc light-Flw champion Pedro Guevara entered this fight with a pro boxing record of 27-2-1 (17 knockouts) and he is ranked as the No.6 flyweight in the world (currently the #1 in this division is Roman Gonzalez). He lost to Yu Kimura at the end of 2015 (=Guevara vs Kimura) but he came back to win in 2016 beating Jether Oliva.
His opponent, Ruben Montoya, has a record of 14-3-1 (9 knockouts) and he entered as the No.56 super flyweight. He suffered two consecutive defeats between 2013 and 2014, against Paul Butler and Samuel Gutierrez, but then he has won over Arturo Infante and Efrain Perez. ‘Jibran’ Guevara vs Montoya is on the undercard of Ganigan Lopez vs Jonathan Taconing. Watch the video and rate this fight!