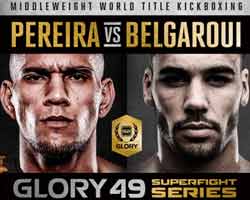 Review by AllTheBestFights.com: 2017-12-09, pretty good fight between Alex Pereira and Yousri Belgaroui 2: it gets three stars.

The Glory Mw champion Alex Pereira entered this fight with a professional record of 37-6-0 (26 knockouts) and he is ranked as the No.1 cruiserweight in the world. He has already fought five times in 2017 losing once, with Yousri Belgaroui in their first bout, but then he has won over Maycon Silva and Simon Marcus (=Marcus vs Pereira).
His opponent, Yousri Belgaroui, has a kickboxing record of 22-3-0 (10 knockouts) and he entered as the No.3 in the same weight class. He lost to Israel Adesanya last year but after this bout he has beat Agron Preteni, Alex Pereira and Jason Wilnis (=Wilnis vs Belgaroui). Pereira vs Belgaroui 2 is valid for the Glory middleweight title; undercard of Rico Verhoeven vs Jamal Ben Saddik 2 – Glory 49. Watch the video and rate this fight!