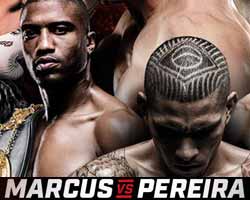 Review by AllTheBestFights.com: 2017-10-14, fight not so exciting between Simon Marcus and Alex Pereira: it gets two stars.

The Glory Mw and former Wbc light-Hw champion Simon Marcus entered this fight with a professional kickboxing record of 47-3-2 (26 knockouts) and he is ranked as the No.1 cruiserweight in the world. He lost the rematch with Jason Wilnis in 2016 (4-stars fight, Marcus vs Wilnis II) but then he has won over Dustin Jacoby (=Marcus vs Jacoby II), Wang Shaohua and he took revenge on Wilnis in his last one (=Wilnis vs Marcus 3).
His opponent, Alex Pereira, has an official record of 36-6-0 (26 knockouts) and he entered as the No.5 in the same weight class. He has already fought four times in 2017 losing once, with Yousri Belgaroui, then he came back to win against Maycon Silva. Marcus vs Pereira, main event of Glory 46, is valid for the Glory middleweight title (Marcus’ first defense); they also faced each other a second time on September 14, 2018 (Alex Pereira vs Simon Marcus 2). Watch the video and rate this fight!

(Free embeddable video hosted on Youku.com and not uploaded by AllTheBestFights)